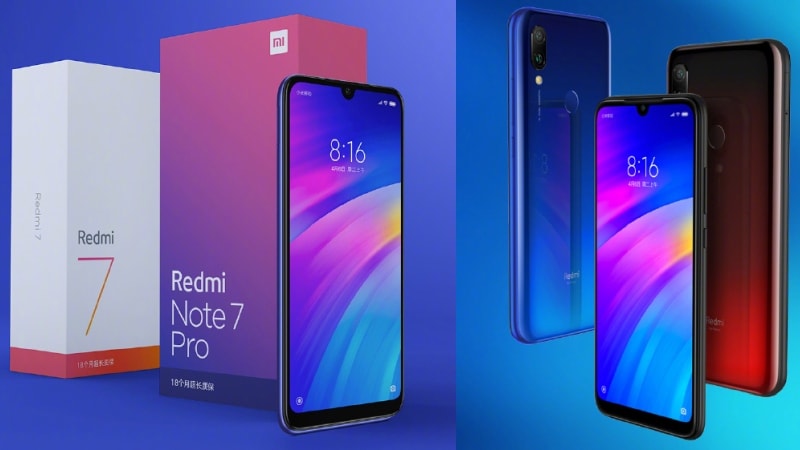 The Redmi 7 launch is scheduled for 2pm CST (11:30am IST) on Monday, March 18. Xiaomi should be broadcasting a Redmi 7 launch live stream on its dedicated pages for the event. As we mentioned, alongside the Redmi 7, Xiaomi will also be launching the China variant of the Redmi Note 7 Pro.

CEO Lei Jun has thus far also revealed the Redmi 7 would come with a 3.5mm headphone jack, infrared (IR) blaster, and a large battery pack. Images have also been shared of the smartphone, as seen above. A TENAA listing revealing a Redmi handset with model number M1810F6LE suggested the key specifications of the Redmi 7. The phone would feature a 6.26-inch HD+ display, 3,900mAh battery, and Android Pie. Similarly, it is found to have an octa-core processor along with 2GB, 3GB, and 4GB RAM options, and 16GB, 32GB, and 64GB of onboard storage versions. There could be a Snapdragon 632 SoC if we believe a recent hands-on video.

The listing also notes that the Redmi 7 will pack a dual camera setup on the back with a 12-megapixel sensor and an 8-megapixel sensor. It also suggested that the Redmi 7 would have various colour variants, including Black, Blue, Green, Grey, Pink, Purple, Red, and White. Also, it specified that the device measures 158.65×76.43×8.47mm and weighs 180 grams. A 3,900mAh battery was also unveiled. The TENAA listing also listed an accelerometer, ambient light sensor, fingerprint sensor, and a proximity sensor.

Affiliate links may be automatically generated – see our ethics statement for details.