Nokia 2.3 is now official, after being launched in Cairo on Thursday. At its price point, the smartphone takes on models like the Redmi 8 and the Realme 3i. Unfortunately, India pricing and availability of the budget smartphone have yet to be revealed. The Nokia 2.3 is the latest from Finnish company HMD Global, the Nokia mobile brand licensee. It’s being touted as a camera and entertainment-focused budget smartphone, and while it ships with Android 9.0, it’s being called Android 10 ready. Featuring a dedicated Google Assistant button, a dual rear camera setup, a large display, and a ‘two-day battery life’, the Nokia 2.3 can be expected to arrive in India “soon”. Read on for details like the Nokia 2.3 price, specifications, and availability.

HMD Global has set the Nokia 2.3 price at EUR 109 (roughly Rs. 8,600), while in Egypt, it has been priced at EGP 1,799 (roughly Rs. 8,000). We can expect the Nokia 2.3 price in India to be around the same. The smartphone will start shipping in markets from mid-December, however it’s exact India availability has yet to be detailed. It will be available in Charcoal, Cyan Green, and Sand.

Commenting on the launch, HMD Global CPO Juho Sarvikas said, “Consumers world over have really appreciated the Nokia 2 family of products. The Nokia 2.3 is a step forward in our promise of offering you an experience that stays fresh longer – giving consumers access to two years of OS upgrades and three years of monthly security updates even in the affordable price tier. On top, it offers industry leading AI for this segment, large screen and our signature promise of two-day battery life – making it the ideal pick for those who rely on their smartphone as their primary screen.”

The dual-SIM (Nano) Nokia 2.3 boots Android 9.0 Pie, a little surprising – though HMD Global does say the smartphone comes Android 10 ready, without providing a timeline for its update. The budget smartphone features a 6.2-inch HD+ (720×1520 pixels) in-cell display with a 19:9 aspect ratio. It’s powered by a quad-core MediaTek Helio A22 SoC coupled with 2GB of RAM. 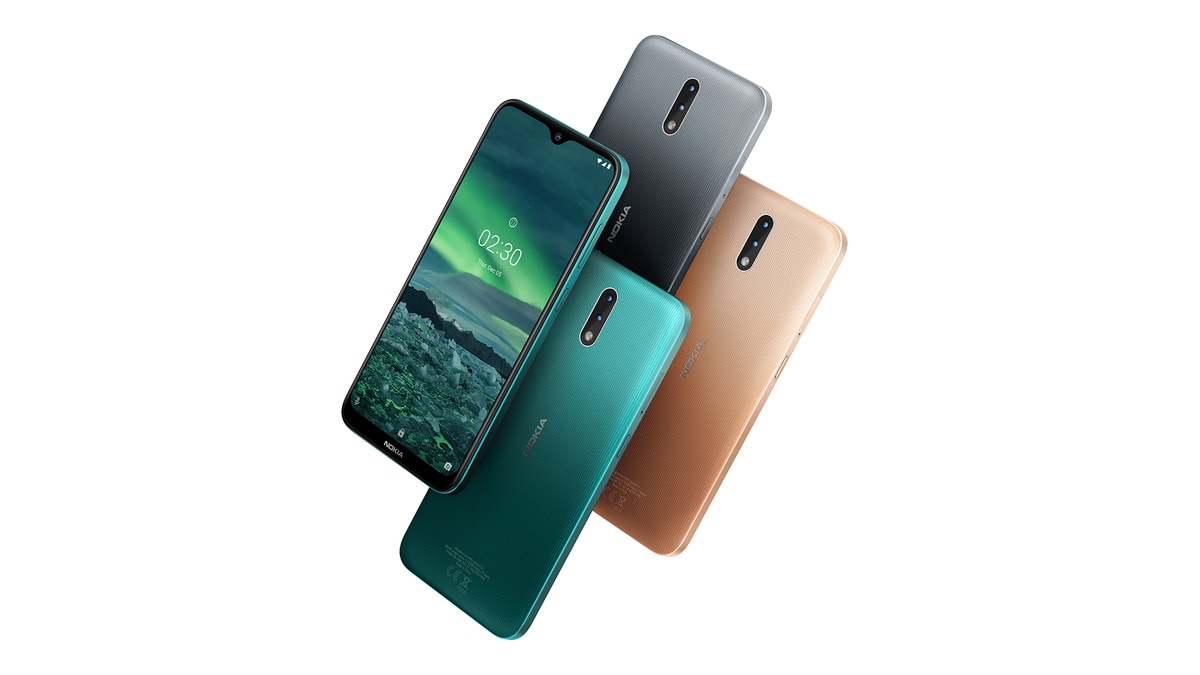 The Nokia 2.3 bears a dual rear camera setup with a 13-megapixel primary camera with an f/2.2 aperture, paired with a 2-megapixel depth sensor that powers the Portrait Mode and multiple bokeh effects. HMD Global is also touting a Recommended Shot feature that takes 15 images before and after shutter press, and then selects the best shot. The rear setup is accompanied by a LED flash module. On the front, the Nokia 2.3 offers a 5-megapixel camera with an f/2.4 aperture.

There is 32GB of inbuilt storage on the Nokia 3.2, expandable via microSD card (up to 400GB) in a hybrid dual-SIM configuration. Connectivity options include 4G LTE, Wi-Fi 802.11 b/g/n, Bluetooth v5.0, GPS/ A-GPS, Micro-USB (v2.0), and a 3.5mm headphone jack. The smartphone runs off a 4,000mAh battery, accompanied by a 5W charger. Apart from a dedicated Google Assistant key, HMD Global says the Nokia 2.3 bears a durable polymer body with 3D nano texture for better grip.