Far Cry 5 is out now for PS4, Xbox One, and Windows PC. And while the console versions are available both at physical retail and digital storefronts, it appears that the PC version of Far Cry 5 has been pulled from Steam. As of this morning, Far Cry 5 has been removed from sale on Valve’s storefront with the buy button for the game missing. The game was available for pre-order and has now been removed. A quick check on Steam game tracker SteamDB shows that Far Cry 5 can’t be bought in India, China, Indonesia, Philippines, Singapore, Vietnam, South Korea, New Zealand, Hong Kong, and Taiwan. This is odd considering that Far Cry 5 was available for pre-order in all of the aforementioned countries but Vietnam.

If you’re living in any of these countries, you can still buy the game via Ubisoft’s own Uplay service. In India at least it means paying 60 Euros or around Rs. 4,848 instead of the Rs. 3,499 price tag Far Cry 5 had on Steam for pre-order. Perplexingly, you can still buy downloadable content related to the game on Steam such as the Far Cry 5 Season Pass and Deluxe Pack. 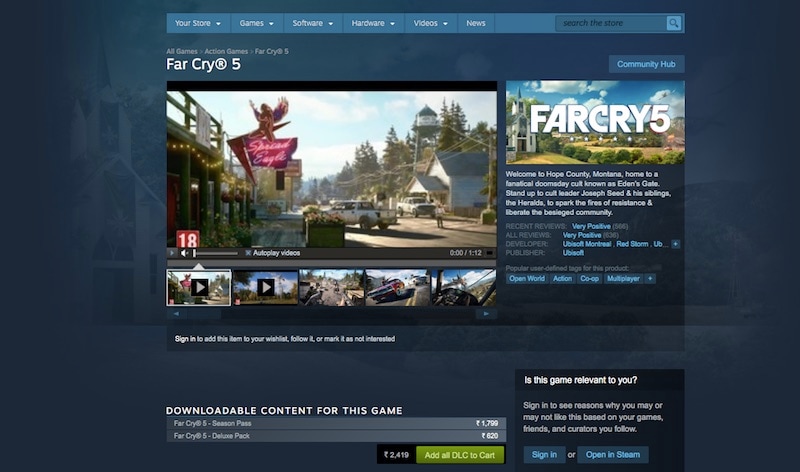 This isn’t the first time a game has been pulled from Steam despite being available for pre-order. Dragon Ball Fighterz suffered the same fate in India due to publisher Bandai Namco not having the licensing rights for the game in India. That being said, Gadgets 360 has reached out to Ubisoft for comment and will update this story if we hear from the company.

Since open-world hacking game Watch Dogs 2, Ubisoft had stopped selling PC games on disc in a host of countries including India. This was, as we’ve been given to understand, a part of Ubisoft’s international strategy and not restricted to India as EA’s move to eradicate discs for the nation a couple of years ago.

For what it’s worth we found Far Cry 5 to be a welcome twist on the franchise’s existing open-world formula. Hopefully its removal from Steam is temporary given how solid its performance is on PC.