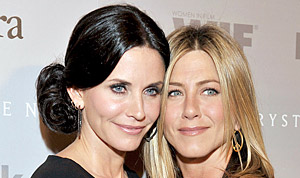 Can’t live without them! From Ashley Tisdale and Vanessa Hudgens to Brad Pitt and George Clooney, these celebrity best friends have stuck by each other side’s through thick and thin.

Their friendship continued long after the cameras stopped rolling, despite their onscreen alter-egos’ rivalry in the trilogy. “We just have a connection and she’s so awesome and one of my best friends,” Tisdale told Us Weekly exclusively in August 2019. “What I love about her is that she’s so talented, and I think what we share is that we’re really grounded people and I think that that’s important, especially with what we do, is to stay grounded.”

The “Voices in My Head” singer pointed out that their relationship goes further back than their Disney Channel days. “We actually worked together a year before in a Sears commercial, and from that day on we were super close,” she explained. “So people don’t really know — I think some people know that, but they think it was that movie that brought us together and it really wasn’t.”

Busy Philipps, for her part, revealed how she maintains her friendship with Michelle Williams years after the pals starred together on Dawson’s Creek. “Whether you’re, like, in the public eye or not, I think the secret to longevity in friendships is putting in the time and the understanding and working through any issues that might arise,” the Cougar Town alum shared exclusively with Us in June 2019. “I think that especially now with texting, it’s even easier to stay in touch with people and be communicative.”

Scroll through to see which A-listers consider one another their BFFs!